In the liner notes to the 30th anniversary edition of All Things Must Pass, his mammoth 1970 triple album, George Harrison wrote, “I still like the songs on the album and believe they can continue to outlive the style in which they were recorded.” 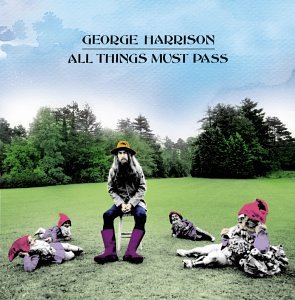 It was a typically modest, self-deprecating statement from Harrison, and one not entirely accurate. Indeed, there might have been a lot of heavy, echoey production on the album, but it’s hard to argue with the results.

Take the stunning title track, where guitar gods Harrison and Eric Clapton strummed unassumingly on acoustics while Nashville legend Pete Drake took the song into the ether with his steel guitar. Some woozy horns, influenced by Harrison’s fascination with The Band, provided a slightly mournful tone.

Such grandeur was absolutely fitting for a set of lyrics as profound as “All Things Must Pass,” a song which sounds like it was bestowed upon Harrison by some higher power. Since he had already been in the public eye for the better part of a decade and always seemed like an old soul anyway, it’s hard to fathom that George was only 25 years old when he first composed the song at the end of 1968.

His efforts to record it with The Beatles during the Let It Be sessions proved futile. As a result, “All Things Must Pass” became one of many Harrison songs which were passed on by The Fab 4 but subsequently made the album of the same name such a masterpiece.

On the surface, “All Things Must Pass” is a song of consolation sung by a man about to depart from his lover. His level-headed approach (“None of life’s strings can last”) to the separation doesn’t make it any easier on the one he’s leaving. Yet Harrison suggests that even sorrow can be brought under control with a little willpower: “A mind can blow those clouds away.”

The refrain is a simple acknowledgement of the world’s transitory nature, and the wisdom inherent in it can be a balm to those suffering through the hardest of times. Harrison subtly suggests that both the good and the bad will come to the fore at different times in everyone’s life, so it’s important not to get carried away with either extreme.

Context plays a role in how every song is heard. In the case of “All Things Must Pass,” grieving Beatles fans heard it as Harrison’s way of saying that they should let the band go following its breakup in 1970. When he passed away in 2002, the song seemed like his final message to mourners all over the world.

In short, it’s a pretty nifty trick that George Harrison pulls off with this majestic track. Whereas other songs wallow in the misery brought about by departures and death, “All Things Must Pass” manages to provide comfort by embracing just how fleeting everything, even life itself, can be.

“All Things Must Pass”

This site uses Akismet to reduce spam. Learn how your comment data is processed.